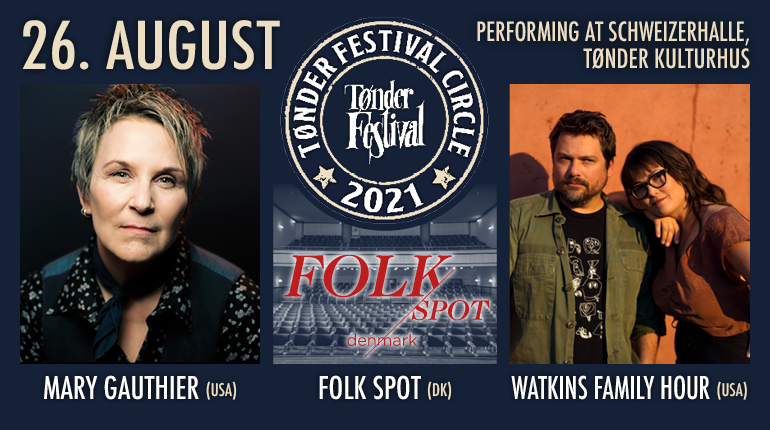 On the bill this evening: Folk Spot, Mary Gauthier and Watkins Family Hour

Welcome back to Grammy Nominated American songwriter Mary Gauthier, who excels at inviting listeners into her intense world of quietly epic stories in song. Mary Gauthier was born in 1962 in New Orleans. Her 1997 debut album Dixie Kitchen launched a career that has seen her recognised as one of USA’s most powerful and most personal songwriters and authors, whose first book Saved by a Song was published by St Martins Press this summer. Accompanying Mary Gauthier on stage at Schweizerhalle is violinist Michele Gazich, and harmony singer, guitar player Jaimee Harris.

Their Tønder Festival debut was planned for 2020, but now they are here, sister and brother Sara and Sean Watkins.

In 2015, they released Watkins Family Hour, a collection of covers including Dylan’s Going, Going, Gone and Grateful Dead’s Brokedown Palace. The spring of 2020 sees the release of Brother Sister, wherein Sara and Sean have written all the material.