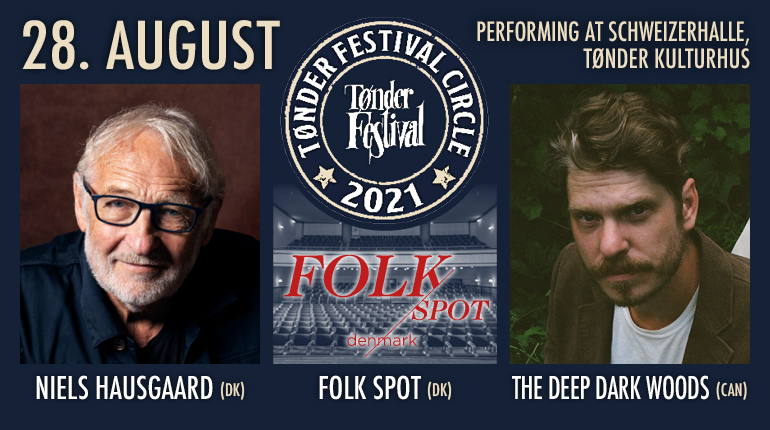 The Danish singer, poet, satirist, songwriter, polemicist and entertainer who has had pride of place at Tønder Festival since the 70s. Niels Hausgaard is one of a kind and he reaches a wide audience. No two Niels Hausgaard concerts are alike, since he leaves himself ample room for improvisation and plays off and with the audience. He maintains that the success of a concert depends on the contact he achieves with his audience.

The Deep Dark Woods (CAN) Their last visit to Tønder Festival in 2012 proved that there is reason to expect great things of the return of the Canadian band The Deep Dark Woods. Fronted by singer and guitarist Ryan Boldt, The Deep Dark Woods deliver original songs with respect for the artistry, the narration and the traditions. They reference Scots and Irish folk songs and American country blues, there is also space for surrealism, emotive murder ballads and close vocal harmonies.

Special VIP event
Tønder Town Council will host a VIP reception on Saturday 28th August at 4 pm in Tønder Town Hall. The reception ends at 7:45 pm, when the guests will board buses to Schweizerhalle for the evening’s concert with Niels Hausgaard and The Deep Dark Woods, which begins at 8:30 pm. Balcony seats are reserved for VIP guests. Provost Henrik Frandsen and his wife will host the reception at Tønder Town Hall, where local gin from Brinksgaard Distillery and a buffet from Café Victoria will be served. A musical surprise is also planned. A restricted number of tickets will be available.