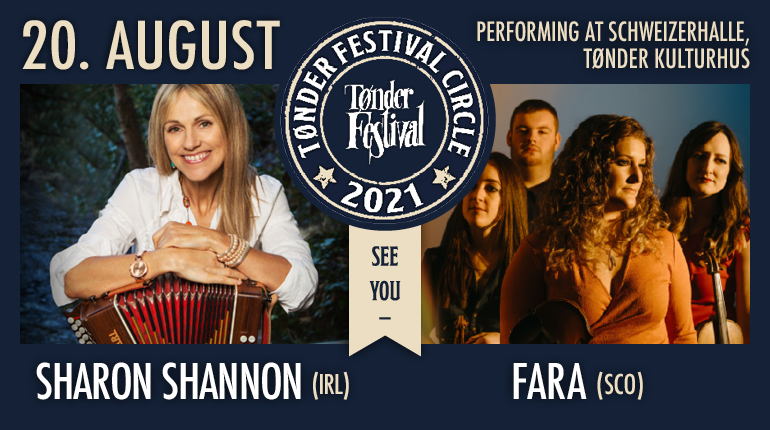 On the bill this evening: Sharon Shannon and Fara

Ireland has many musical feathers in her hat, and Sharon Shannon is one of the musicians who bear the international reputation of the Irish music tradition high. Born in 1968, Sharon Shannon, an acclaimed accordionist and violinist, began performing in public at an early age. Her accordion work up through the 80s led to her joining The Waterboys in 1989, and in 1991 she released her solo album Sharon Shannon. This album became the best selling record of traditional Irish music ever released in Ireland. Her latest album is The Reckoning from 2020.

The Fara group come from Kirkwall in Orkney and began life in 2014 as a quintet. Today, Fara is a quartet: three female violinists, Kristan Harvey, Jeana Leslie and Catriona Price, and pianist Rory Matheson, who is from the north western coast of Scotland. Fara’s is a fresh musical take on Scots folk music, and Orkney music in particular. Fara played at Tønder Festival in 2015 and 2017.

If you need a ticket for your carer please contact Tønder Festival at info@tf.dk. There are a limited number of companion tickets!