"A Sami joik singer does not sing about a river – his song is the sound of a river," explains  Torgeir Vassvik.

Torgeir Vassvik grew up in the very north of Norway, out on the coast, and in his youth he played in an indie rock band. He spent much of his teenage years wandering outdoors and it was here he began to sing without words. Joik, as the singing style is called, is related to open throat singing and yodling and is closely connected with shamanism, known from many native cultures.

Though his parents were sami, there was not much sami culture in the home. It was strongly Norwegianised - an expression used in Norway when everything must be as Norwegian as possible. That has been the lot of the sami culture for many years.

Torgeir Vassvik is one of the musicians who have returned to their roots, in his case almost by chance. It wasn't until he was in his late twenties when Vassvik began to add joik singing to the music of his indie rock band and performed it on stage.

Shamanist Link
"Joik is not singing words, it is feelings expressed in song. You don't sing about a river - you become the river. You create the experience by singing your inner river," is how Torgeir Vassvik puts it. You can joik a place, an animal, a person or a stone. Joik is closely connected to shamanism, the original Sami religion. For Torgeir Vassvik, joik has been a journey back to his Sami identity, but he is still Norwegian.

Sami banned up until1959
Torgeir Vassvik's Sami-inspired music is a positive version, without the sorrow, he says. Some Sami are still bitter about the assimilation and strong Norwegianisation seen in much of the last century. Not until 1959, a few years before Vassvik was born, was sami allowed to be spoken in schools.

But for Torgeir, this history brings no bitterness.

Coastal Sami live off fishing and found assimilation easier than the Sami who lived off the reindeer inland. They are as nomadic as their beasts.

Torgeir Vassvik tours the world with his trance-inducing joik singing. He performed at Roskilde Festival in 2015 and at World Music's major event, Womex, in 2016.

LISTEN TO THE PODCAST: VASSVIK INTERVIEW 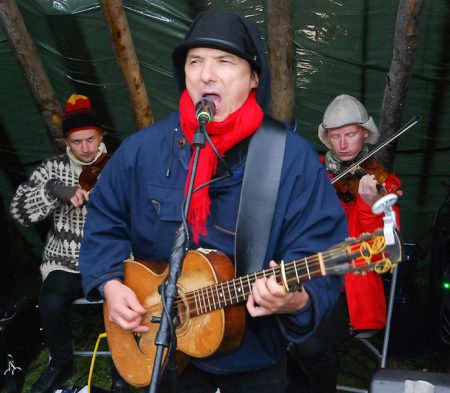