The French Roots podcast is a musical exploration of some of the parts of the world touched by French culture. From the Celtic music of Britanny to the musical influence of France in its former colonies in the Caribbean, from cajun music in Louisiana to the French-inspired music in eastern Canada. 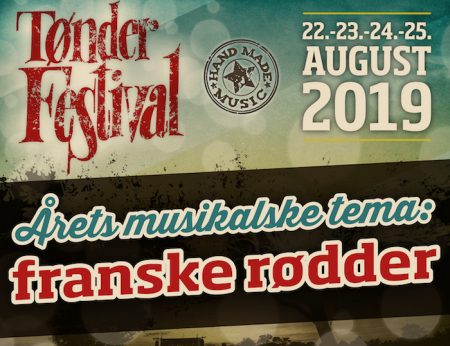 Listening to modern folk and roots music, we learn the story of French influence on today's western world. All the music is played by musicians appearing at Tønder Festival 2019.

The Breton penninsula in western France has two cultures, the Celtic and the French. The Celtic language, music and dance are alive and well, thriving at great dance evenings called Festnoz. Young local bands have revitalised the Celtic music and have won popularity on tours throughout France and the rest of the world. Playing here: Youenn Roue (Startijenn) & Yannick Plantec (Plantec).
Produced by Claus Vittus. Part 6, released 10. August 2019:

In 1755, the English carried out an ethnic cleansing of the French colonists in the area they called Acadia, renamed Nova Scotia, Prince Edward Island and New Brunswick. "We are here because our forefathers hid in the woods," says Pastelle Leblanc, a musician from Prince Edward Island today. Descendants of those few survivors from Acadia form part of today's eastern Canadian population, and their music lives on, for instance with the band Vishtèn.
Produceret by Claus Vittus. Part 5, released 23 May 2019:

This edition of "French Roots" tells how old French songs from the Middle Ages have been given new life by the Canadian orchestra Les Poules a Colin from Quebec. Cast: Béatrix Méthé from Les Poules a Colin. The broadcast is produced by Claus Vittus. Part 3, released 12 April 2019:

In this part of French Roots we hear the French blues band Delgres. With roots on the Caribbean island of Guadeloupe, which is still part of France, the band take their name from the island's partisan fighter Louis Delgres, one of the most spectacular suicide bombers the world has ever seen. He blew himself and several hundred soldiers up in Guadeloupe in 1802.
Produced by Claus Vittus for Tønder Festival. Part 2, released 31 March 2019:

The French language has developed in many various ways and sounds differently sung in different parts of the world. In this part of French Roots, we can almost hear medieval French in the old songs performed by a Canadian band, Louisiana French as sung and spoken by Cajun people, and Créole French as spoken for example on the Caribbean island of Guadeloupe. We hear the voices of Béatrix Méthé (Les Poules à Colin), Pascal Danae (Delgres) and Joel Savoy. Produced by Claus Vittus. Part 1, released 20 March 2019: