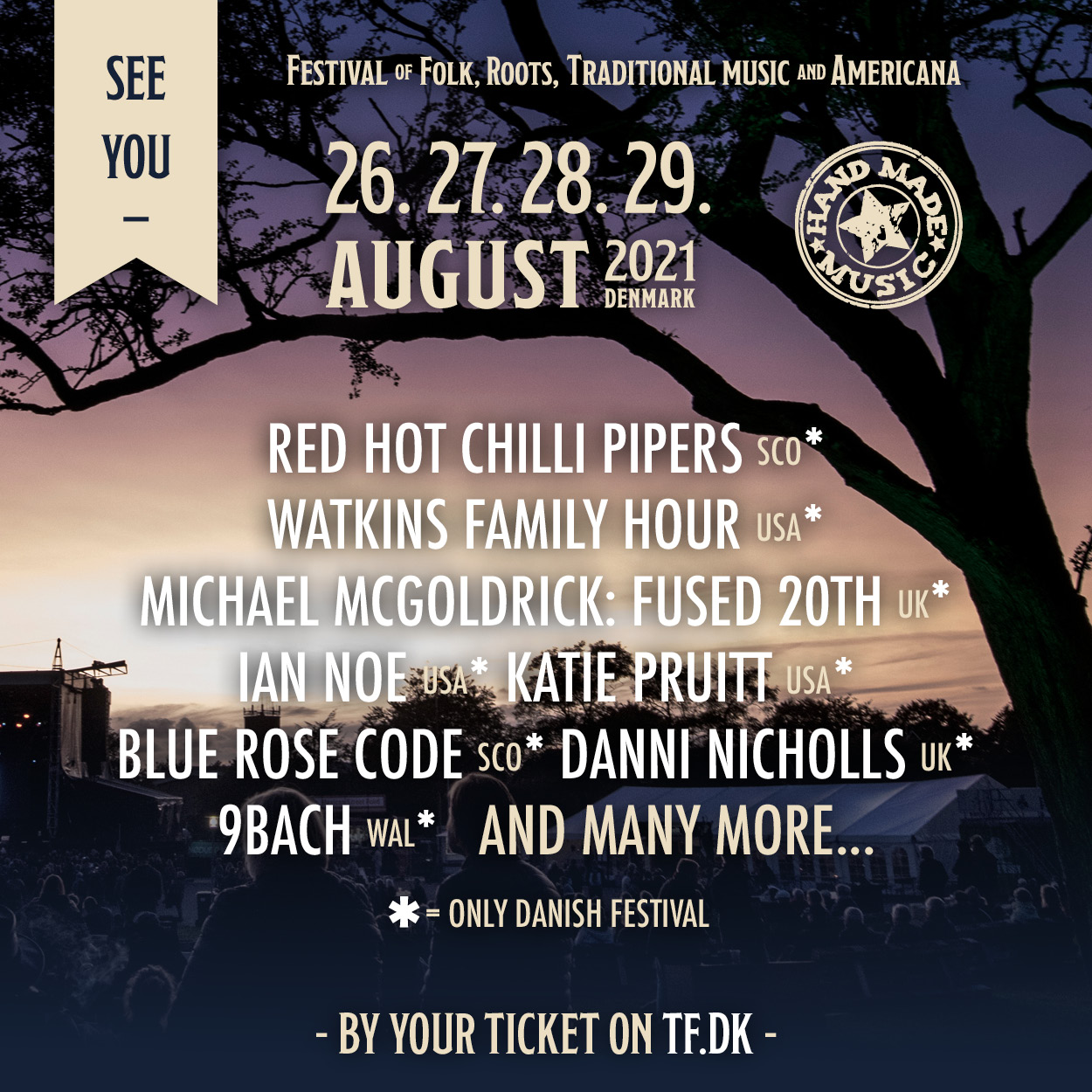 Many of the musicians who were to appear this year have agreed to play at Tønder Festival 2021. The first include Red Hot Chilli Pipers, Ian Noe, Katie Pruitt and Blue Rose Code.

The Tønder Festival 2020 programme was practically in place when the corona crisis ruined everything. The Festival was cancelled, but many of the musicians booked were soon prepared to move their deal with Tønder Festival by one year. Now, the first eight international names are ready for next year’s festival poster.

Top Scots
From Scotland, the festive Red Hot Chilli Pipers will be here to rock us with bagpipes, drums and rock classics. Also from Scotland comes critically-lauded Blue Rose Code, stage name for songwriter Ross Wilson, who is a first-timer at Tønder Festival.

Welsh folk, Nashville tones and a Festival Veteran
This Welsh band is called 9Bach and they blend traditional Welsh folk music with rock and electronica. There’s a return visit from British songwriter and singer Danni Nicholls, whom we saw here in 2017. Danni Nicholls is a sucker for country music and has recorded several albums in Nashville. Another well-known face is Anglo-Irish multi-instrumentalist Michael McGoldrick, who is coming to Tønder Festival so we can join him in celebrating the 20th anniversary rerelease of his ground-breaking album Fused.

Songwriters from USA
Katie Pruitt is a new contender on the American country scene. The 26 year-old songwriter, based in Nashville, has won plaudits for her mix of country, folk and indie rock. This is her first appearance at Tønder Festival, as it is for Watkins Family Hour, brother and sister Sara and Sean Watkins. Both have worked with their own projects, as well as with the famous band Nickel Creek. Also, a welcome revisit from Ian Noe, who has not wasted time establishing his name as one of the most exciting young singers on the American country and folk scenes.

We Are Still Here
The COVID 19 pandemic has hit Danish festivals hard, and Tønder Festival is no exception. Now all eyes are focused on next year’s festival, and the job is fully in hand in Tønder.

“We have taken a bad hit financially since the 2020 festival was cancelled. But we are doing all we can to safeguard the 2021 Tønder Festival, so our audiences can again enjoy the music, the atmosphere and the good company at our festival. It has been heart-warming to see the extent of the support Tønder Festival has been shown by our audiences, musicians, technicians, volunteers, all our partners and the whole of the local society. We still have a real need for substantial backing, and we’re all really missing meeting up at Tønder Festival – so 2021 it is,” says Maria Theessink, artistic director at Tønder Festival.