The History of the Festival

It all began 40 years ago as a Midsummer’s Fest at Bachmann’s Water Mill on the Vidå River in Tønder. In June 1974, a bunch of young music enthusiasts organised a three-day event of folk music, ballads and beer in the Old Mill, which soon became known as the Song Mill.

Enthusiasm was plentiful, and the group put on yet another three-day session in September that same year. On stage on both occasions, incidentally, was a Scotsman who has ever since been a loyal musician, presenter, media consultant, and general support for the Tønder Festival: Rod Sinclair.

Carsten Panduro is one of the founders and later director for four decades. It is not too much to say that Carsten Panduro – latterly with Anni Lehmann– created and consolidated the spirit and ethos, not to mention the lofty standards, that are Tønder Festival’s signature to this day. Carsten Panduro was replaced in 2014 by Maria Theessink as artistic director.

The first real Tønder Festival took place over three days in August 1975. The music programme was eclectic– from the Slesvig Infantry Regiment Music Corps to beat groups like Alrune Rod and Taurus, the latter better known later as TV-2. Steffen Brandt was telling the truth when, as Niels Hausgaard’s guest in the Culture House in 2006, he announced,“It really is a while since I played at Tønder Festival.”

Tønder Festival grew slowly but surely in the following years, with the Old Mill as its magical centre. One of the musicians who made an outstanding contribution to the special Tønder Festival atmosphere and substance was the popular Scots singer and guitarist Alex Campbell. He later described the first Tønder Festivals to local paper Jydske Tidende: ”I ran around like an ant on a griddle. I sang until I lost my voice. I kissed all the girls and drank as though prohibition was being brought back. They say that life is not only the days you live, but those you remember. If that’s so, then Tønder Festival has lengthened my life considerably.” 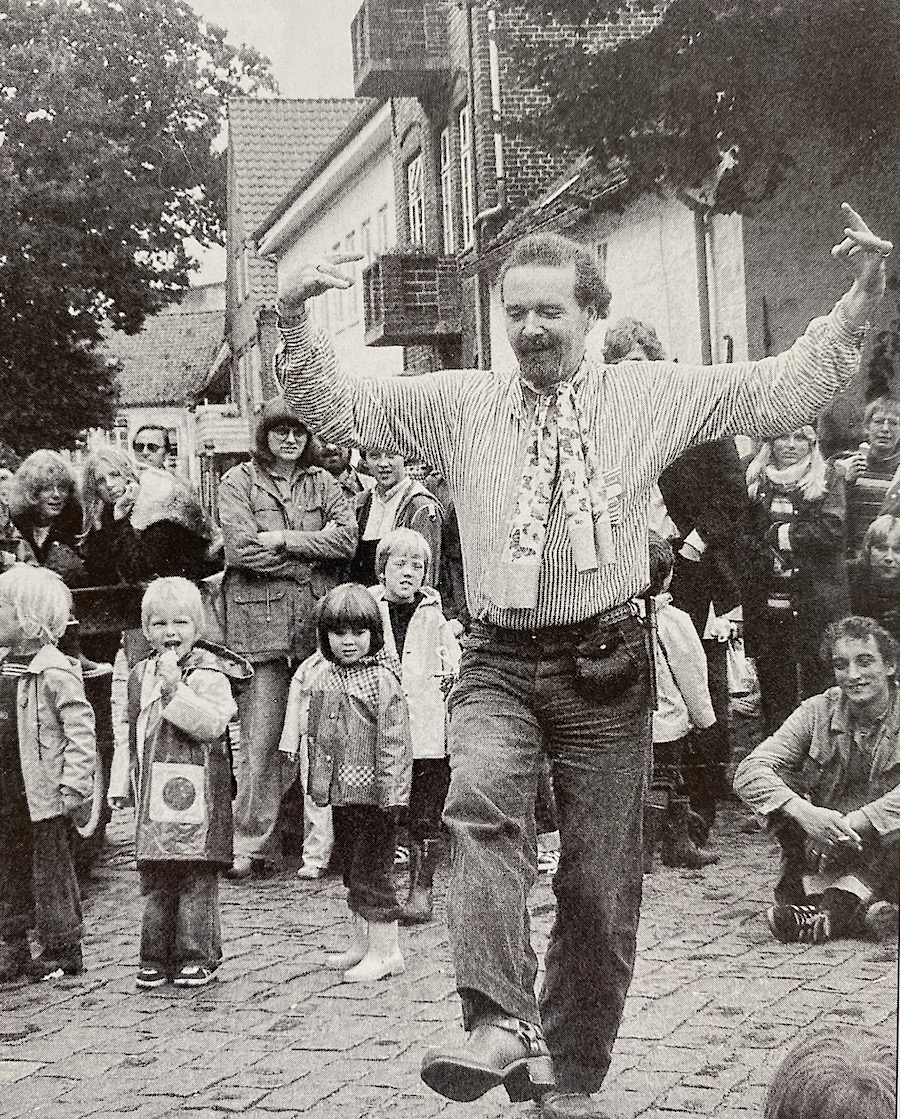 In 1978, Tønder show ground became the Festival site, with a marquee for 800 people. The folk music festival in Tønder gained a reputation outwith the town, and over the border. The Festival expanded, the number of bands increased dramatically, and audiences poured in. This entailed a major overhaul of the Festival’s financial and administrative sides.

In 1980, Tønder Festival Foundation was set up, to ensure the Festival’s economic future. The Festival got its own secretariat. In the beginning, this consisted of a desk in the corner of the Tønder Tourist Bureau, where festival boss Carsten Panduro had his seat. Those were the years when Tønder Festival built up its identity, its folk music profile and its high standards, to a great extent Carsten Panduro’s achievement. 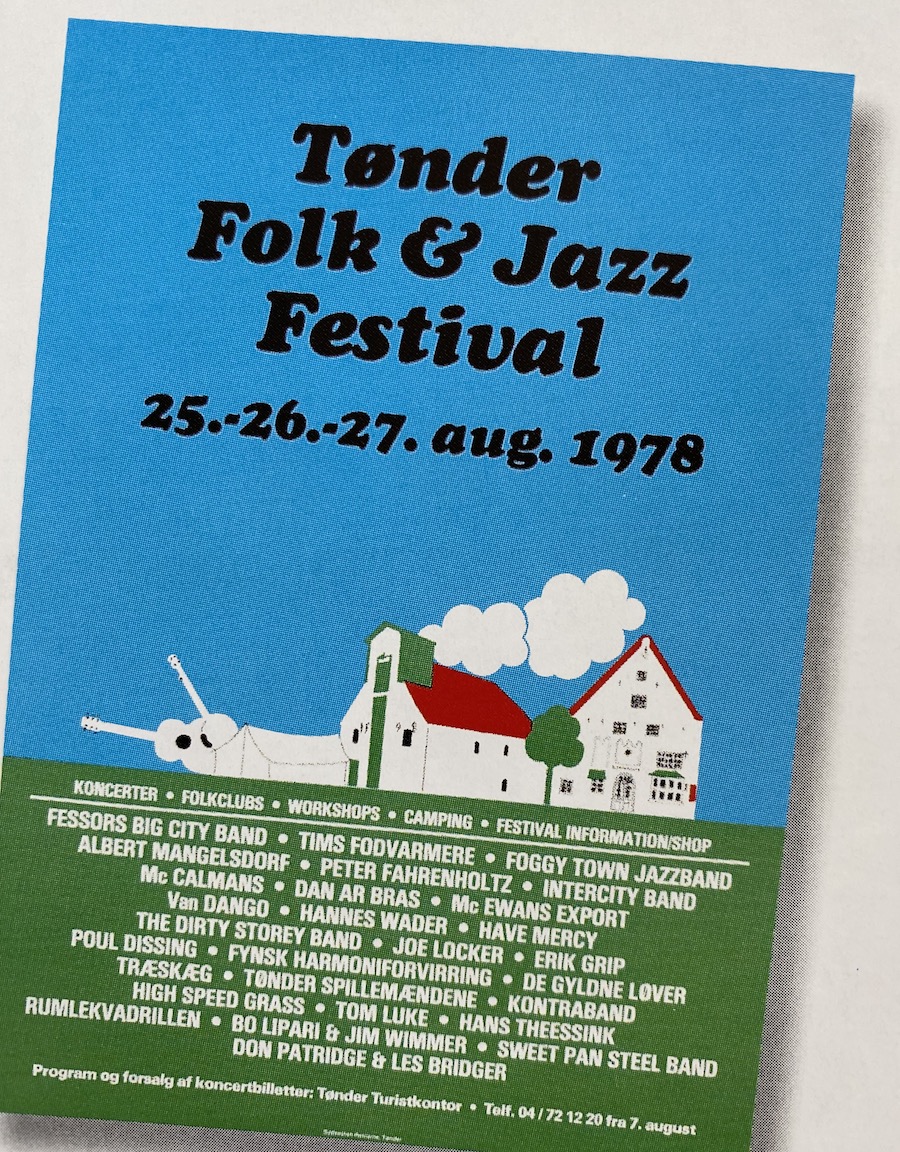 DR, then Danmarks Radio, had been regular guests at Tønder Festival since 1975. In the autumn of 1982, Danmarks Radio TV broadcast seven programmes entitled Tunes from Tønder (Toner fra Tønder.) The whole country heard about the musical celebrations going on every August in Tønder. 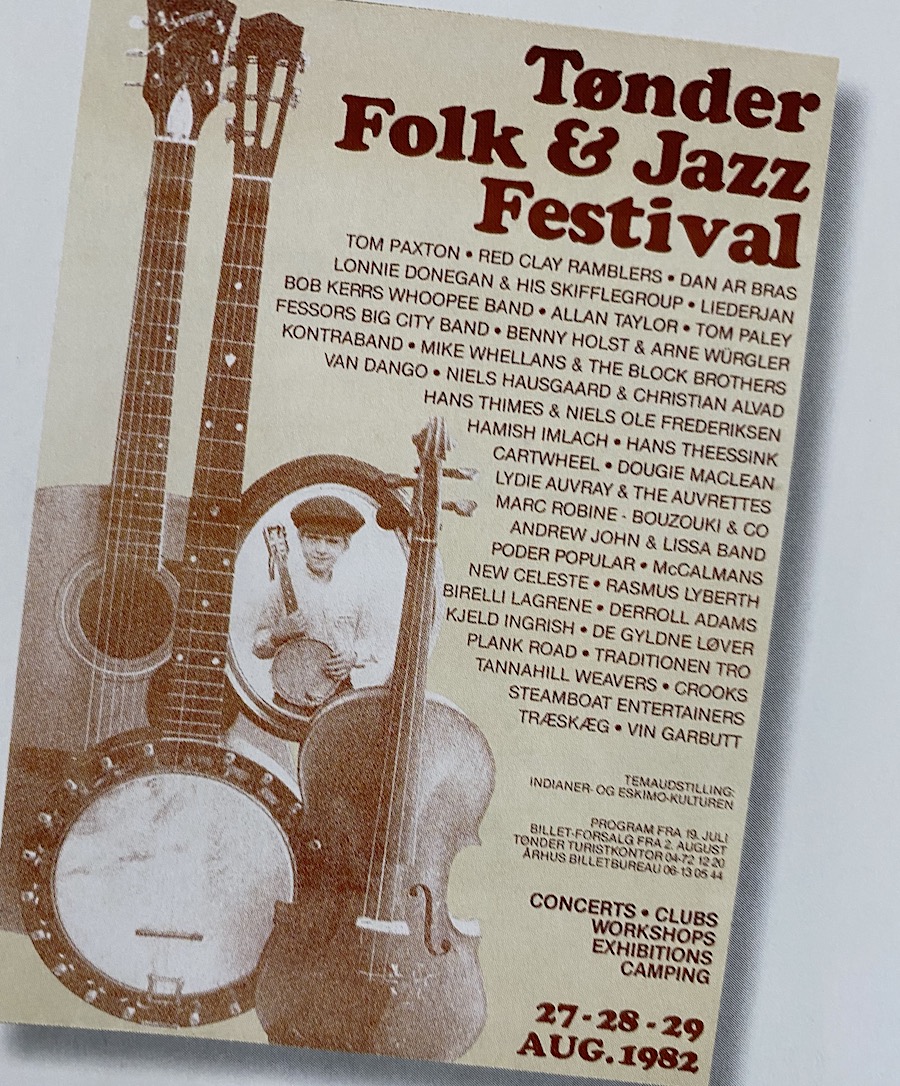 In 1983, Millstream Records was born. It very quickly became Scandinavia’s biggest special importer of folk and roots music and subsequently operated as a post order firm and on-line shop (1986-2014). During the Tønder Festival today, the Millstream shop is crowded. Also that year, the private limited company Friends of Tønder Festival was set up.

The company bought the old Hagge’s Hotel in central Tønder, rebuilt it entirely with massive volunteer help, turning it into a home for the Festival secretariat, Tønder Festival Foundation, Millstream Records and, not least, the music venue Hagge’s Music Pub on the ground floor. 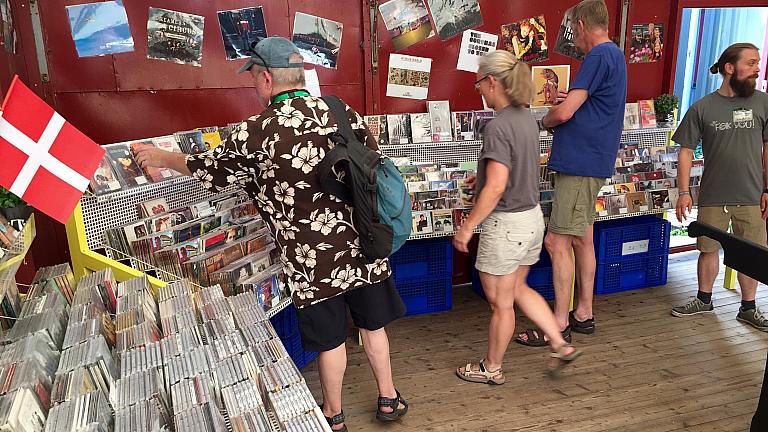 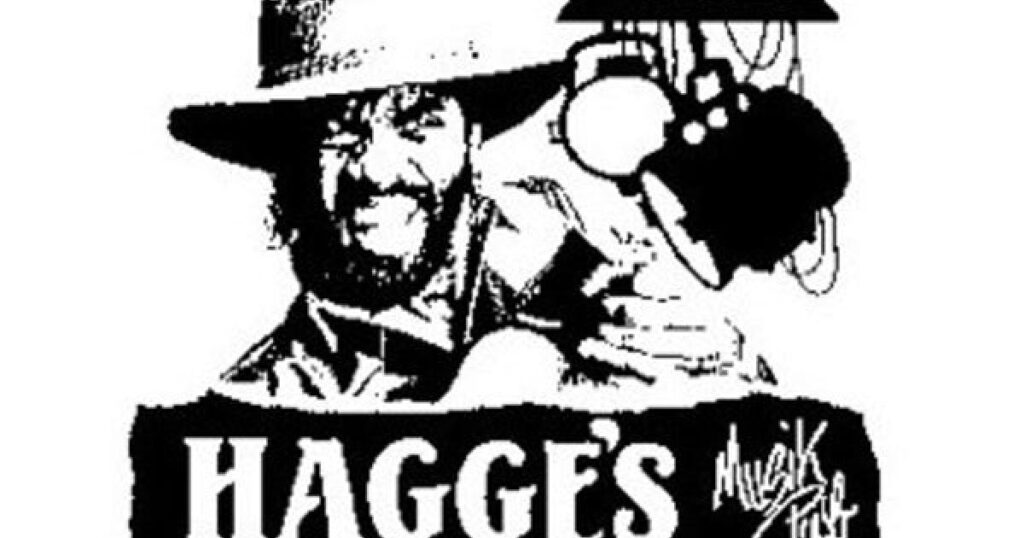 In 1987 The Dubliners celebrated their 25th anniversary at Tønder Festival, the same year as The Chieftains played here for the first time. Alex Campbell, dear friend and mentor to the Festival, died that year, and the remembrance concert for Campbell in the Old Mill is the stuff of history. It is interesting to note that the 1987 Tønder Festival programme included Dave Van Ronk, one of the musicians who welcomed Bob Dylan to New York’s Greenwich Village in the early 60s. Van Ronk was personally invited by Rod Sinclair.

Tønder Festival had become a stronghold for folk music in Denmark. Financially, Tønder Festival occasionally ran into difficulties, but, thanks to perseverance behind the scenes, massive support from the volunteers, and valuable local back-up, Tønder Festival survived to become one of the country’s major annual cultural events. 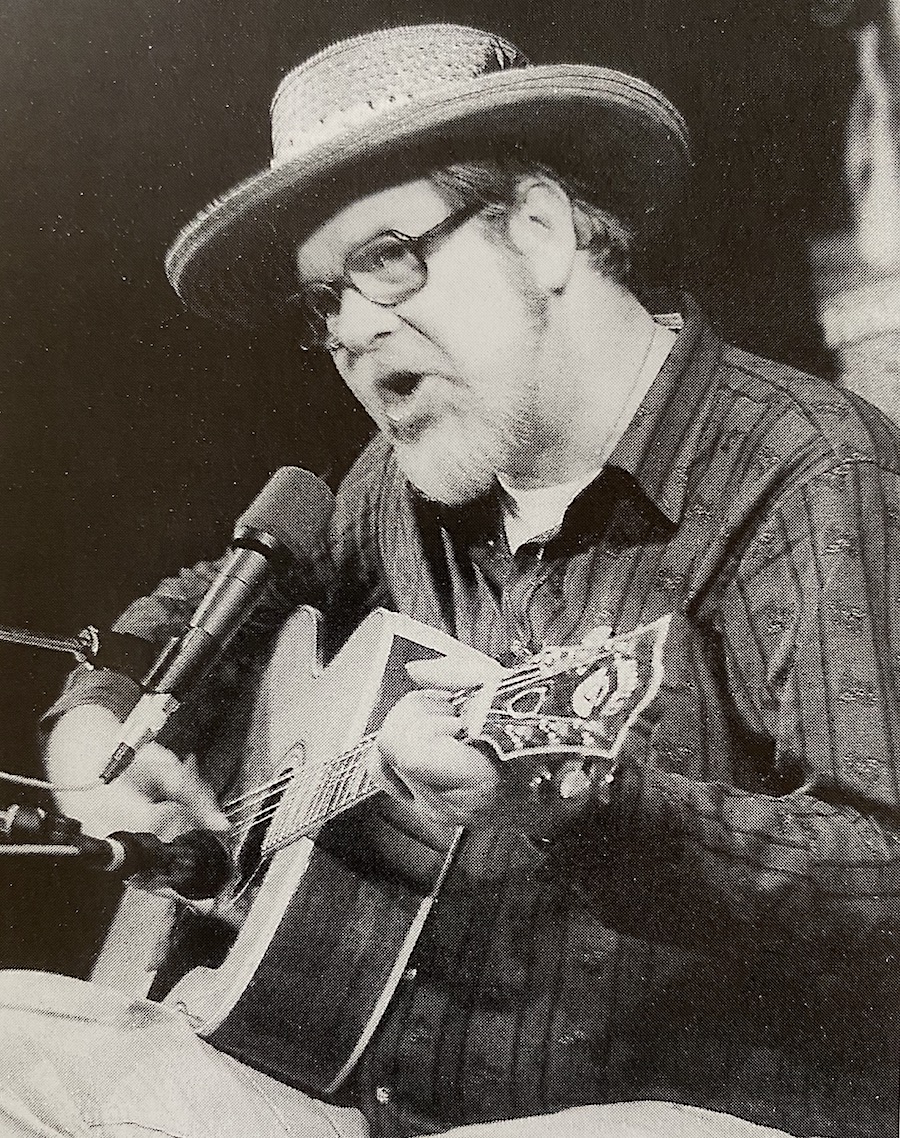 Pete Seeger and the heady 90s

Tønder Festival’s music really took off in the 90s. In 1990, the legendary Pete Seeger appeared at Tønder along with Arlo Guthrie, a scoop that marked Tønder Festival’s rise from the folk-song hootenanny of the early years to a heavy-weight among European music festivals. Throughout the 90s, Tønder Festival consolidated its name, its artistic status and its audience.

The Whole Package into the New Millennium

Tønder Festival met the new millennium intact, including its authenticity, the close contact between musicians and their audience, the many sessions with musicians from all over playing together informally, the legendary night-time back-stage meetings between musicians, concerts in all the marquees and venues, life on the campsite, music on the streets of Tønder and the intense hours of music in Hagge’s. But primarily Tønder Festival assured its name as a presenter of top class international and nordic music. 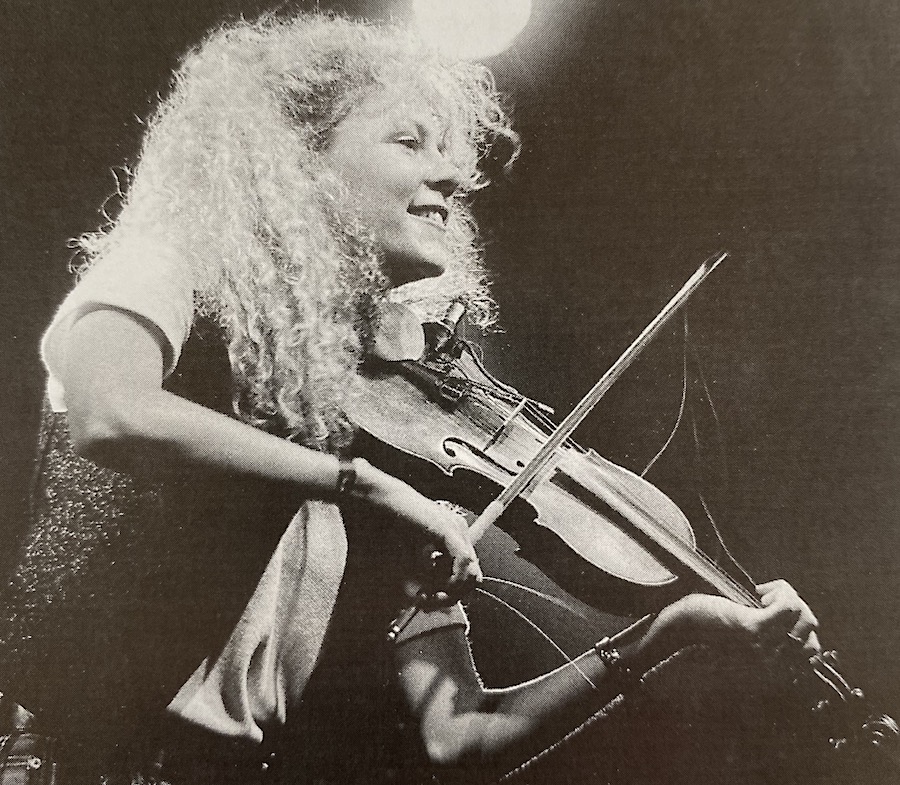 Danish Folk Music on the Move

From its opening in 1998, the Folk Music Line at the Carl Nielsen Music Academy in Odense has fostered new talents. A lot was happening on the Danish folk scene those days, with young musicians making their mark. Tønder Festival took the pulse of the new movement, presenting The Young Generation in 2004, students from Carl Nielsen Music Academy taking the stage at Tønder led by one of Danish folk music’s finest representatives, fiddler Harald Haugaard.

In the 90s it was folk electronica band Sorten Muld who, from the Tønder stage, showed the world where folk and roots music in Denmark was heading. In the noughties, bands like Haugaard & Høirup, Instinkt, Phønix and Henrik Jansberg interpreted the traditions anew. 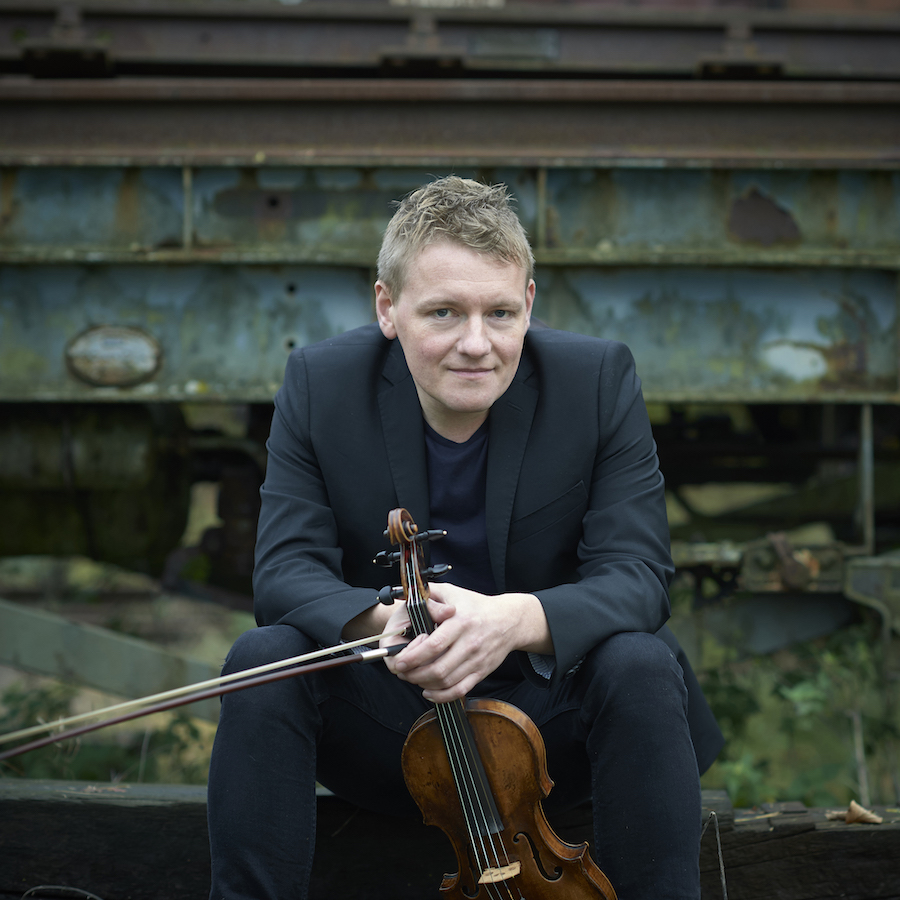 High Standards and a Financial Boost to the Area

International names like Le Vent du Nord, La Bottine Souriante, Tim O’Brien, Arlo Guthrie, The Dukhs, Swedish Sofia Karlsson and Faroese Eivør set the standards for the festival during the first decade of the 21st century. Tønder Festival’s audience were getting on in years, and though many of the musicians were young, the Festival had to consider appealing to a younger audience.

A report by Copenhagen Business School in 2008 established that Tønder Festival had enormous importance – not least financial – for the town and the region. Tønder Festival’s over 2000 volunteers represent a powerful social capital. The Festival also enhances the Tønder brand; all in all, Tønder Festival has an annual input to its home town of around 70 million kroner (approx.£7 million). 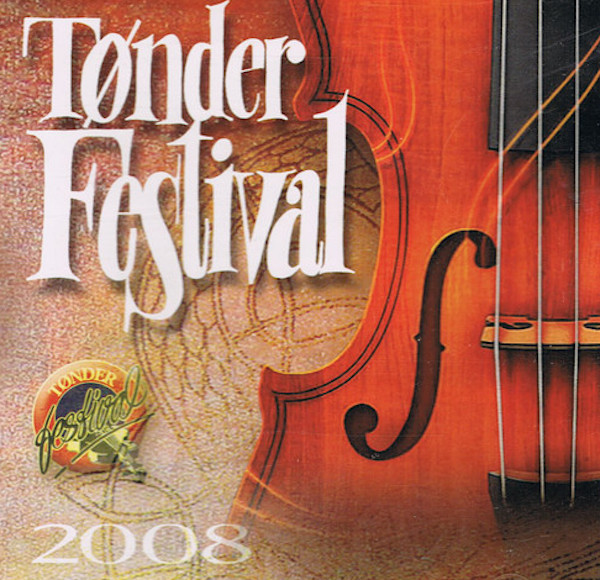 Tønder Festival celebrated its 40th birthday in 2014, in the middle of a sea change that started in 2012. The changes numbered a new ticketing system, so festivalgoers bought a wristband for the whole festival instead of tickets for the individual concerts. The festival site became Tønder Festival's focal point with new stages and new zones such as NOLA, dedicated to New Orleans and Louisiana culture, the Fanø tent and Little Dublin. New indie rock names like The Avett Brothers, Deer Tick and The Low Anthem adorn the programme, and the media have reacted with renewed and increased interest in Tønder Festival.

Tønder Festival's finances were hard hit for some years. Since 2014, things have been steadily improving. Under new management, with Kirstine Uhrbrand as administrative director and Maria Theessink as artistic director, a new course was set, together with the board of the Tønder Festival Foundation and the Tønder Festival Association. At the same time, support from the local community grew and ticket sales increased year by year.

Musically, Tønder Festival has been attentive to two fronts: maintaining the festival's traditions, its spirit and identity, and finding and booking strong new talents on the international scene. Since 2014, Tønder Festival has been a prime mover in many notable musical careers: The Lone Bellow, Colter Wall, Sturgill Simpson, Tyler Childers, Margo Price, Tami Neilson, Ruston Kelly and David Ramirez.

Tønder Festival today stands alone: a music festival with its own profile, a strong identity and a unique atmosphere, nurtured over five decades. Year by year, Tønder Festival is growing with its volunteers, guests, musicians and local people, who all share one quality: their love of something built up with professional care and precision. It is special. It is the real thing.